Living with PD: a never-ending marathon

A personal interview portrait from the inside. Depicted is a retired police man, now a patient, describing how Parkinson’s disease turned his life upside-down. 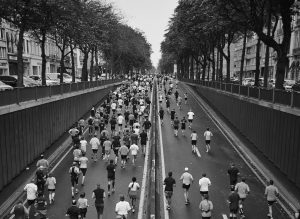 I got the first clue that something wasn’t right at the warm-up session ahead of a long-distance race two years prior to getting the definitive diagnosis of Parkinson’s disease. Coordination and lifting of arms and legs didn’t really work properly.

It was an irony of fate, here I had stopped smoking and was a serious exerciser, and eight years later the disease forced me to stop working, and I became what was called a retiree on disability, at the age of 58. Life took a swift turn, from leading an exciting professional life as a police man, to being a patient with Parkinson’s disease.

My earlier voluntary exercise has now been replaced by a much more forced one. I occasionally suffer from involuntary movements, which afterwards feels like having run a marathon as you are completely exhausted. The problem is also that I do not know how I will feel the next day. Some days come with the involuntary movements, and then it is a challenge just to be able to sit at a table and eat, to say the least. Other days, I can be so stiff that I have to crawl to the toilet and Mary, my wife of nearly 50 years, has to help me.

My quality of life is clearly affected, but I refuse to sit down and mope. In addition to a fantastic wife, I also try to fill my life with meaningful activities. I am active in a patient group through which I meet other patients with Parkinson’s disease. Although we have various symptoms, we share the experience of having a chronic illness. The disease will unfortunately have its way, but I will fight for a while more.

Mary, married to John: I suffer with him
It goes up and down for John and it can be a bit hard from time to time. Everyday life can be difficult to plan and it happens that we have to cancel a planned activity with short notice. At the same time, it feels good to be at home and able to provide help, for example with a toilet visit when the stiffness has set. I also suffer with John when the involuntary movements set in, when just eating becomes very difficult. But I take time to do my own things every now and then, like yesterday when I met with my weaving group. It may seem wrong when the first advice to a patient with Parkinson’s disease can be to remove the rugs. We have laughed a lot at that.

This is an individual portrait compiled after an interview, the names used are fictional and distinguishable details have been anonymized.