The ISP research platform is a cornerstone in the discovery and development of novel drug candidates for the treatment of brain disorders at IRLAB. To date, all the candidates in the company’s portfolio have been generated through ISP with the most advanced candidates in clinical phase II.

Rethinking drug development strategy
Research and development with ISP take place using an advanced systems biology strategy, in which the complex interactions in the brain are analyzed instead of solely focusing on individual mechanisms. To evaluate the effects of newly developed molecules, their effect on the brain as an integrated system is studied, an approach known as phenotypic profiling. The detailed analysis methods used include behavioral patterns, biochemical markers and gene expression in various parts of the brain. In practice, this means studying the effects directly in a living organism. It is with this drug development strategy that IRLAB believes it can produce better drug treatments in a more resource efficient manner.

In comparison, the more conventionally adopted research methods take a substance through initial experiments in test tubes and does not test the effects on the entire organism until later in the process. 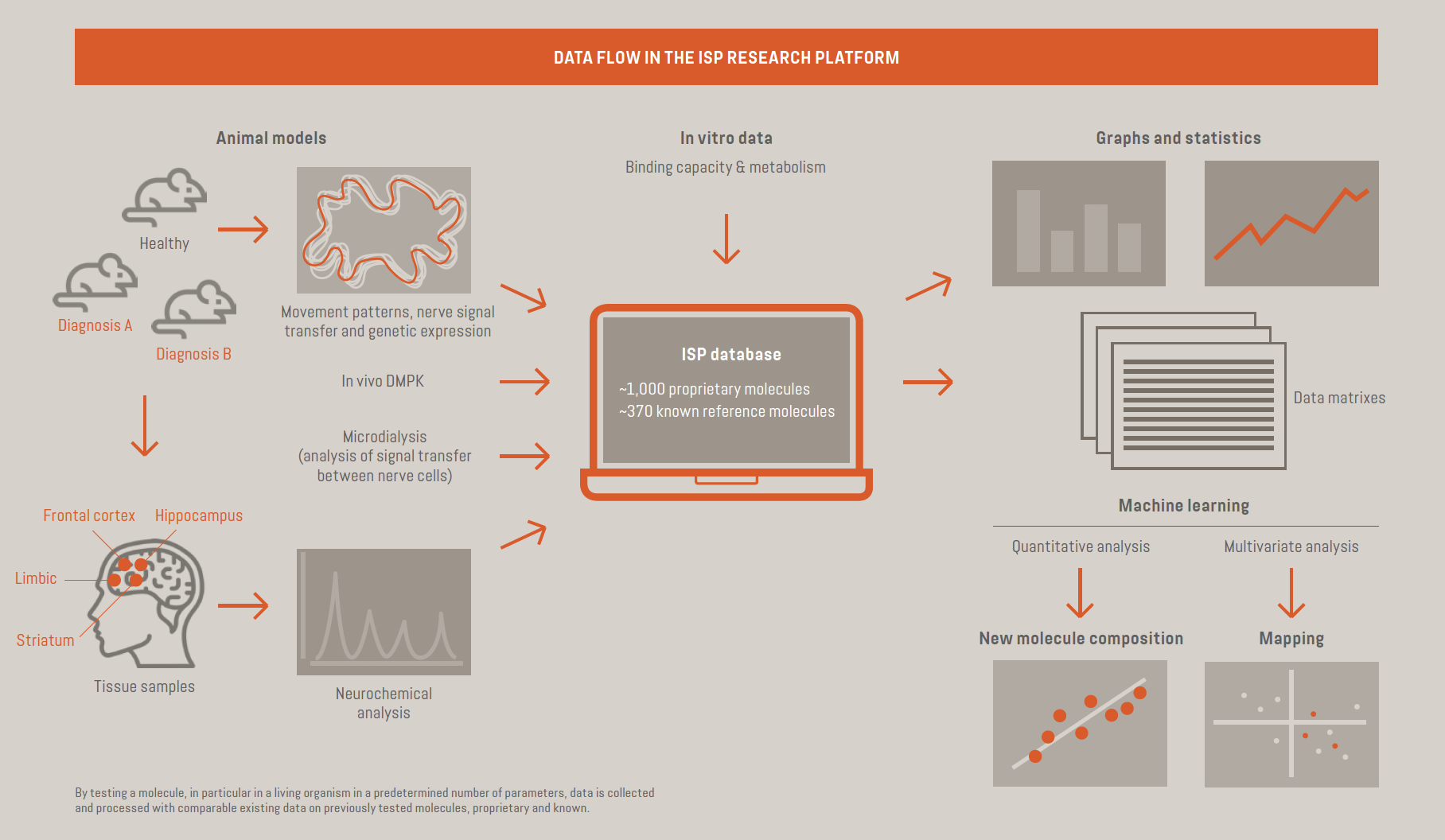 The inner workings of the Integrative Screening Process (ISP)
The research platform, ISP, is constructed around a unique database of systematically collected and structured information that is analyzed and processed using advanced mathematics and statistical algorithms, known as ‘machine learning.’

The ISP database is a comprehensive collection of over 1,250 diverse CNS compounds from different classes. The measurements and analyses have been made using the same structured method since the 1990s, which yields excellent comparisons with historical data, where effects and other properties of new compounds can be compared with known drugs. The database maintains a consistently high level of quality. All data is handled in a machine learning process that captures underlying relations and trends in the body of data. IRLAB’s systems biology data on both internally discovered molecules and other substances such as marketed drugs constitutes the basis for discovery and development of new substances.

The database is a multidimensional, continually growing, reference library by means of which the composition and effect profiles of proprietary molecules are evaluated. Using a standardized approach, the observed effects at the system level can be linked to both the chemical properties in the molecules and to possible clinical effects. Thereby, IRLAB’s researchers can draw conclusions about the molecule’s effects. This is supplemented with classical analyses of, for example, pharmacokinetics (i.e. how the substance is absorbed, broken down and distributed in the body) as well as with trials of safety and tolerability.

Increased amount of comparable data also increases understanding of the effects of various molecules on the human brain and its disorders. All contributing to an improved predictability.

Evidence-based predictability enabled
After the molecules are produced in IRLAB’s laboratory, they are tested on living organisms (in vivo). The effects of new molecules are investigated by capturing the animals’ movement patterns and subsequently analyzing them with advanced algorithms. A large number of biochemical markers are also measured using standardized methods so that comparable data can be generated on all molecules tested. After careful quality control, the several thousand data points measured are saved in the ISP database informing the design of future molecules.

Predictability is good owing to the breadth and quality of the database. This is one cornerstone of IRLAB’s competitiveness.

High productivity
Since 2000, eight drug molecules developed using ISP have been designated as drug candidates and taken further into clinical trials. If not sold, they form the company’s current project portfolio spanning from preclinical studies to clinical Phase II.

High quality
New molecules with strong properties can be developed further by starting from the properties of known drug molecules. The new molecules are subject to advanced systems biology profiling, where all information generated is utilized for evaluation and further optimization. This means that ISP is precise and resource- and cost-efficient. Starting primarily from effects on living organisms (in vivo) means that IRLAB has optimal preconditions for capturing molecules with unique effects at the system level that cannot be detected in test tube models (in vitro), and therefore are often missed when molecules are screened using conventional methods.

One further advantage is that as a rule, the molecules produced based on the ISP have favorable general drug properties, since problems (for example, with uptake in the body or negative effects on the body’s physiology) can be demonstrated and sifted out early on in the process. This means that resources for development are only put into molecules with very good properties for success.