IRLAB (Nasdaq First North Premier: IRLAB A) today announced that the in-depth analysis of the data from the recently concluded Phase IIa study of IRL790 in Parkinson’s patients with L-dopa induced dyskinesia (LIDs) brings further evidence of the drug candidate’s ability to significantly and meaningfully improve daytime movement quality. IRLAB has therefore decided to prioritize the LIDs indication in the development of IRL790. A Phase IIb/III study in this patient group is planned to start in the first half of 2020, as part of a pivotal clinical program towards market approval. The planned study in Parkinson’s disease psychosis will be performed in parallel with the pivotal program in LIDs.

IRLAB (Nasdaq First North Premier: IRLAB A) today announced that the in-depth analysis of the data from the recently concluded Phase IIa study of IRL790 in Parkinson’s patients with L-dopa induced dyskinesia (LIDs) brings further evidence of the drug candidate’s ability to significantly and meaningfully improve daytime movement quality. IRLAB has therefore decided to prioritize the LIDs indication in the development of IRL790. A Phase IIb/III study in this patient group is planned to start in the first half of 2020, as part of a pivotal clinical program towards market approval. The planned study in Parkinson’s disease psychosis will be performed in parallel with the pivotal program in LIDs.

The in-depth data analysis is based on data from the recently concluded Phase IIa study to evaluate the efficacy, safety and tolerability of IRL790 in patients with L-dopa induced dyskinesias (LIDs, involuntary movements). Three independent measurement methods were used to assess the clinical efficacy of IRL790: UDysRS, MDS-UPDRS and standardized patient reported diaries. As previously communicated, IRL790 showed beneficial safety, tolerability and pharmacokinetics in the study. Two out of three measurement methods revealed a significant and clinically meaningful effect on dyskinesia.

“I think that the study shows a strong efficacy signal for IRL790 in treating dyskinesia in people with Parkinson’s, using measures that are of relevance to them, and importantly with very few adverse events. These findings need to lead to larger studies, to more clearly evaluate the efficacy, and hopefully lead to a much-needed additional therapy for this disabling side-effect of levodopa therapy”, said Dr Camille Carroll, Associate Professor and Honorary Consultant Neurologist and National Speciality Lead for Neurodegenerative Diseases NIHR CRN, University of Plymouth.

“IRLAB has now concluded an in-depth analysis of the Phase IIa study data that further substantiates the potential for IRL790 to improve treatment of L-dopa induced dyskinesia. We have gained a deeper understanding of the results, including pros and cons of the independent measurement methods used in the study, and are now able to optimize the clinical path forward. The next step will be initiation of a Phase IIb/III study in this severely troubled patient group, which can be part of the pivotal program. The planned study in Parkinson’s disease psychosis will be performed in parallel with the final studies in the LIDs program. This does not delay the total program”, said Nicholas Waters, CEO at IRLAB.

The in-depth analysis of study efficacy data showed clinically meaningful effects on dyskinesias assessed by the Hauser standardized patient reported diaries and by MDS-UPDRS (Unified Parkinson’s Disease Rating Scale) dyskinesia assessments. The patient reported diaries showed that IRL790 treatment, compared to placebo, significantly reduced patient’s time with troublesome dyskinesias by 1.6 hours daily. In patients without concomitant amantadine treatment, the reduction in time with troublesome dyskinesia was 2.7 hours daily, compared to placebo. Further, MDS-UPDRS dyskinesia assessment showed a significant improvement in patients treated with IRL790 as compared to placebo. As illustrated in the data table below, both of these efficacy endpoints were further improved over placebo in patients who were not treated with the anti-parkinsonian drug amantadine as part of their regular medication. 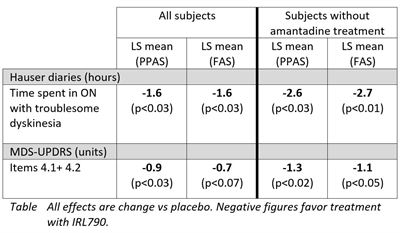 Joakim Tedroff, CMO at IRLAB, commented: “In patients with advanced Parkinson’s disease, IRL790 treatment improved the motor function response with a marked qualitative shift in ON-time towards more ‘good ON hours’, without troublesome dyskinesia or adverse effects. This beneficial shift in motor response quality was even more pronounced in patients not taking amantadine. This amantadine interaction is a very important discovery from a therapeutic perspective. In order to demonstrate the true efficacy of IRL790 this will be considered when designing coming clinical studies.”The period when levodopa has a positive effect on Parkinson's disease symptoms is called ON-time and is also when dyskinesias occur. Once the medication stops working, the so-called OFF-time starts, where symptoms recur. In-depth assessment of other motor symptoms of Parkinson’s disease using MDS-UPDRS part II+III, MDS-UPDRS OFF-time assessment as well as the 24-hour diaries showed that patients treated with IRL790 maintained their general motor function and their total daily ON-time. There was no change in daily OFF-time. Thus, the positive effects of IRL790 are achieved without negative effects on traditional Parkinson symptoms, increased OFF-time or decreased ON-time. These important observations were similar in patients with, and without concomitant amantadine treatment.

Application of UDysRS in the study

As previously communicated in the top-line analysis, no difference in efficacy between IRL790 and placebo was seen using the Unified Dyskinesia Rating Scale (UDysRS), despite the significant effects on dyskinesia in patient reported diaries and MDS-UPDRS assessments. The objective UDysRS parts III and IV are designed to be applied in patients in ON state, i.e. when dyskinesias are present. In-depth analysis of the UDysRS data generated now show that the assessments suffer from technical shortcomings during sampling of the UDysRS since many of the patients were not in ON state during these assessments. The frequency of patients not in ON state indicate that UDysRS data is not relevant for assessment of ON state dyskinesias in this study.

Assessment of dosing and pharmacokinetic properties

The suitable dose range for treatment of dyskinesia in Parkinson’s disease has been established in this study. Doses ranging 10 to 20 mg/day, are safe, tolerable and effective. In accordance with previous studies, IRL790 demonstrated linear kinetics with dose proportional plasma concentrations, which allows for good control of exposure. This greatly facilitates dosing in the Parkinson’s disease population. These patients, who generally need individual dosing, will benefit from the pharmacokinetic properties of IRL790, which allows for dosing and dose adjustments with high precision. No influence by the patients’ other treatments on plasma concentrations of IRL790 could be detected in the study.

Assessment of side effects

The full results of the study will be published in an international scientific journal.

IRL790 is under development for the treatment of levodopa (L-dopa) induced dyskinesias (PD-LIDs), and psychosis in Parkinson’s disease (PD-P). Dyskinesias are involuntary movements that often follows treatment with L-dopa. In pre-clinical studies, IRL790 reduces involuntary movements that occurs after a period of treatment with L-dopa. Additionally, in pre-clinical studies, IRL790 has shown antipsychotic properties. The company believes that IRL790 thus has the potential to simultaneously treat both dyskinesias and psychosis in Parkinson’s disease.

IRL790 was taken twice daily (b.i.d.) as adjunctive treatment to the patients’ regular and stable antiparkinsonian medication. The first two weeks of treatment comprised titration of placebo or IRL790 (10 to 20 mg daily) to the individually preferred and tolerated dose then used for the remaining two weeks. Tolerability and safety were continuously monitored.

Amantadine is a drug frequently used in the treatment of Parkinson’s disease together with levodopa, especially for patients who have dyskinesias.

About FAS and PPAS

The Full Analysis Set (FAS) consisted of all randomized and treated patients who received one or more doses and who provided post baseline data. The Per Protocol Set (PPS) consisted of patients from the FAS but excluded those with major protocol violations.

“OFF” denotes stiffness, marked decrease of mobility or immobility

“ON with troublesome dyskinesias” is when the patient is troubled by involuntary twisting and turning movements.

The Unified Parkinson's Disease Rating Scale (MDS-UPDRS) is a standardized and validated estimation scale developed for assessment of symptoms in Parkinson's disease. The instrument has been tested for good reliability and validity and consists of the following four parts:

Part I –      Non-Motor Aspects of Experiences of Daily Living

Each section has questions that rate the symptoms from 0 to 4 where higher values indicate more severe symptoms.

The Unified Dyskinesia Ratings Scale (UDysRS) evaluates the involuntary movements that can be associated with long-term treatment with dopaminergic medication. The UDysRS has four parts: